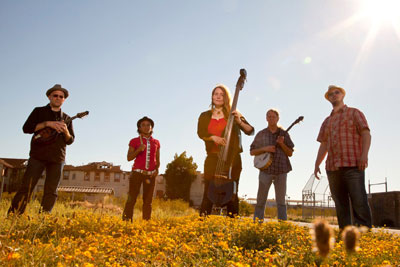 Beltaine’s Fire is a 5-piece juggernaut of revolutionary love and rage combining complex melodic instrumentation with hip hop vocals. The sound is somewhere between the Wolfe Tones and Rage Against the Machine, Ozomatli and Ben Harper. Think Utah Phillips or Woody Guthrie if they had fronted underground hip hop bands and you’ll start to get an idea of what you’re in store for when these musicians hit the stage.

Based in the SF Bay Area Beltaine’s Fire has been rocking clubs, bars, festivals, underground hip hop shows, punk clubs, protests, and street-corners since 2005. They are releasing their third studio album, Anarchitechture, in Summer of 2011. Their current lineup is Drums, Bass, Vocals, Electric Banjo, and Violin/Mandolin.

Their sound is both deeply rooted in tradition and history and completely original, combining ancient and modern in a bold fusion that Epitunes described as “that rare group that succeeds at combining seemingly disparate musical styles into an appealing new sound… unlike anything you’ve heard of before” .

There are no upcoming events at this time.